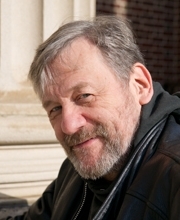 Professor of the Practice in Media and Activism, Studies of Women, Gender, and Sexuality,
Harvard University

Professor Bronski is an American academic and writer, best known for his 2011 book A Queer History of the United States  A professor at Darmouth College, he currently teaches in the women’s and gender studies department, and also teaches courses in LGBT history and Jewish Studies at both Dartmouth and Harvard University.

A Queer History of the United States the Israel Fishman Non-Fiction Award for the best LGBT book of 2010 by the American Library Association, as well as the Lambda Literary Award for the Best Non-Fiction Book of 2012.  He also previously won two Lambda Literary Awards as an editor of anthologies, in 1997 for Taking Liberties: Gay Men’s Essays on Politics, Culture, & Sex and in 2004 for Pulp Friction: Uncovering the Golden Age of Gay Male Pulps.

Bronski has been involved with LGBT politics since 1969 as an activist, organizer, writer, publisher, editor, and independent Scholar. His book, You Can Tell Just by Looking and 20 Other Myths about LGBT Life and People (co-authored with Ann Pelligrini and Michael Amico, 2013) was nominated for a Lambda Literary Award for Best Non-Fiction. His work is included in over fifty anthologies. He currently edits the Queer Action/Queer Ideas series for Beacon Press. His latest book, Considering Hate: Violence, Goodness, and Justice in American Culture and Politics (co-authored with Kay Whitlock, 2015) couldn’t be more timely.