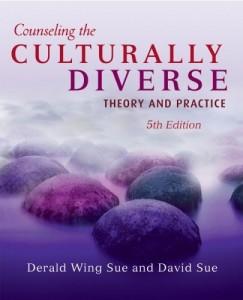 Webinar: A Seminar That Comes to You

Here is a link to the website where you can sign up for Derald Wing Sue’s lecture:

Some racism is so subtle that neither victim nor perpetrator may entirely understand what is going on—which may be especially toxic for people of color. Racial microaggressions are brief and commonplace daily verbal, behavioral, or environmental indignities, whether intentional or unintentional, that communicate hostile, derogatory, or negative racial slights and insults toward people of color. Those engaging in microaggressions are often unaware that they are doing so, though the people involved often have vague feelings of discomfort or anger which are never addressed.

Two colleagues—one Asian-American, the other African-American—board a small plane. A flight attendant tells them they can sit anywhere, so they choose seats near the front of the plane and across the aisle from each another so they can talk. At the last minute, three white men enter the plane and take the seats in front of them. Just before takeoff, the flight attendant, who is white, asks the two colleagues if they would mind moving to the back of the plane to better balance the plane’s load. Both react with anger, sharing the same sense that they are being singled out to symbolically “sit at the back of the bus.” When they express these feelings to the attendant, she indignantly denies the charge, saying she was merely trying to ensure the flight’s safety and give the two some privacy.

Were the colleagues being overly sensitive, or was the flight attendant being racist?

This workshop helps people sort out hidden messages that may be affecting morale and performance on the job and in daily life. By developing a taxonomy of hidden, or microaggressions, D

r. Sue has been able to help people of different races and ethnicities work together more comfortably and more productively. This is an opportunity to hear from a nationally-acknowledged expert in diversity education. Dr. Sue’s training in this area helps diverse work teams make the invisible visible, provides tools to address microaggressions as they occur, and to diffuse their harm.

Dr. Sue has done extensive cultural diversity training for many Fortune 500 companies, institutions of higher education, business, industry, government, public schools, and mental health organizations. In that capacity, he has worked with mental health practitioners, university faculty, teachers, students, community leaders, senior executives, and middle-level managers. His work is recognized not only on a national level, but on an international one as well. Dr. Sue has presented and traveled in Asia (China, Hong Kong, Japan, Taiwan, Macau, the Philippines, and Singapore), New Zealand and Europe. He is frequently sought as a spokesperson on issues of racism, multiculturalism, and diversity by the press and other media outlets.